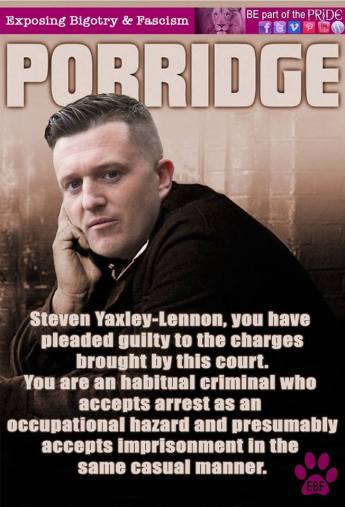 Nope it doesn’t happen very often, in fact almost unheard of, but I am sorry.

I believed the hype, Goldibollocks and Screechy jailed, then I find Tommeh has gone down too, the world has just got better, only Hatie Slopkins for a full house and the ale would flow better than the Gypsy Wedding I have just dealt with(swap Guinness for ale though) I gave up, not fighting bigotry, racism and the like but I gave up, I had a few weeks of being with my kids, talking to my wife and not worrying about the shit that’s flying. I gave up caring about the cunt in the White House or what the cunt in 10 Downing Street is doing to fuck our lives up. In all honesty I became human again, Facebook was just an F on my phone, Twitter was a distant memory, my web history was 18+ viewing and not Islamophobia, my life became a bubble……..I gave up, I’d had enough, could no longer be arsed. But then I was shaken out of it, I’m back (ish). I hate bigotry, racism, bully’s, money grabbing fraudsters and wankstains so I’m not going away.

I play/ed sport to a high level..sportsmen and women are heroes. Not politicians, not right wing media whores but those that represent their country, not wankers who wrap themselves with the flag.

So Tommeh the hero, his fans go wild and Stephen Yaxley Lennon is now more famous than Harry Kane, Joe Root and Anthony Joshua. Or is he………

The gruesome twosome are in this for the cash l, no one can deny this, so who is SYL or syphilis as I like to call him… arrested, charged and jailed he ain’t a KFC bargain bucket. He’s a racist cunt, like Goldibollocks and Screechy but he’s a cleverer racist cunt. His rap sheet is mahoooooosive, from wife beating to mortgage fraud, it’s almost “if you’ve got a crime get me out of here. This is the SYL who has been filmed beating the shit out of fellow race goers, who was on tv as a racist cunt and is now languishing behind bars. Is there any difference between him and our favourite racist cunts……. nope.

Goldibollocks and Screechy are all about money, five faaaasand her for a van, five faaaasand there because our system was hacked, 20 faaaasand for court cases, the rap sheet goes on and on , and Stephen Yaxley Lennon( he hates us using this name)is exactly the same, but cuter

He uses Rebel TV as his mouthpiece, and from moles inside this he was defrauding them, he set up his own platform to con more money out of the sheeple, he is in love with For Britain and Anne Marie Waters, he WAS the leader of the EDL who apart from the NF, BNP and Combat 18 the most racist of Potato groups in this country. And he asks l, just like Screechy and Goldibollocks, for money. SYL, Goldibollocks and Screechy. Two cheeks of the same arse.

So here’s a promise to you here at EBF, I may not buy as many hobnobs, coffee and custard creams as I did, but I ain’t letting the cuntspangles off the hook for a minute.