When I was a kid my parents had their own ‘polite’ way to talk. They would never use the right word for anything to do with sex or with bodily functions. My sisters lady part was her tuppence and between my legs I had a penny’. I never quite worked out why the price was so different. You can guess what ‘movement’ means in my parents house.

Imagine my surprise when Britain First advertised an event to build one of their own! Shouldn’t be too hard for them. All they need to do is gather round and hold hands. All those big shits in one place really would be a massive ‘movement’!

There just isn’t enough Andrex in the whole world to clean that shit up! 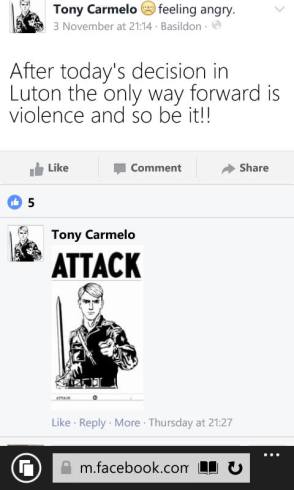 Last Thursday, November 3rd we heard that Jayda Fransen had been convicted of religiously aggravated harassment and wearing political uniform. Why she wasn’t also done for failing to surrender to bail is a bit of a mystery but that’s OK. It was the least important of the three charges against her.

This was the reaction from Tony Carmelo, a regular Biffer attendee and all round arse-wipe that evening. Showing just how little respect Britain First has for British law and British customs, Tony (I’m a big kid) Carmelo has decided that he wants to batter someone. Like the rest of Britain First, Carmelo lacks the intelligence to handle not getting his own way like a grown up.

And just look at the uniform in the pic he posted. For fuck’s sake Tony – how neonazi can you get?

Oh well, off you go and beat up some poor sod. That’ll make you feel better, won’t it Tony?

But who is he going to batter? Now there’s a question.

It won’t be the Judge – that’s for sure. Even he isn’t that stupid. And it won’t be the police – all the Biffers ever do when the police are about is hide behind them. So that leaves people who can’t defend themselves and who had nothing to do with the court case anyway.

The fact is Jayda broke the law and has to face the consequences.

Only a childish bully would want to hurt an innocent person because he didn’t like the outcome of a court case. That’s why Carmelo fits in so well at Britain First. They’re all childish bullies. 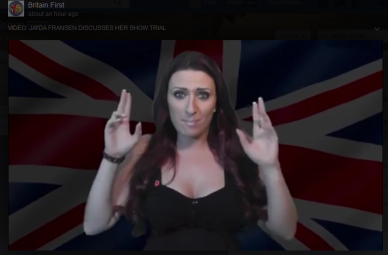 It wasn’t a show trial, you stupid bint. It was a run of the mill, common or garden hearing in a Magistrates court to deal with a petty criminal.

I watched your video. You didn’t discuss the trial at all – not in any way that made sense.

You showed an edited video making it look like the other party started it.

Why don’t you show us the beginning? You know – the part where you single out the woman because she’s white and that goes against your small-minded idea of what Muslims should look like. Why not show us that part?

Why don’t you show yourself crossing the road to have a go at her in front of her kids?

Why don’t you just come clean and admit that you’re a great big fuck up – just like all the rest of Britain First?

You won’t do that because you’re just a liar. You and your arse-wipe leader, Golding. He’s a liar too. I was amazed at how many of your lies EBF has exposed when I started reading back through their blog and the Facebook memes of yours they’ve shown up. That’s why it’s so great to have been asked to join them. I can help put the final few nails on your coffins, you fuck-witted, neonazi scumbags.

In your video you soon stop talking about the trial altogether. No surprise there – there’s nothing you can say that won’t show you up for the sulky, whiney child you really are. So you go on to talk about the judge instead. If you thought that would make you less whiney, you’re wrong. It just makes you look even more stupid… and whiney.

Face it Jayda – you fucked up, you got caught, you have to take the shit that comes with it. That’s the British legal system.

If you don’t like our laws, Dutchy…. Fuck off back to Holland!

I’m ‘Fluffy’ and I’ll be joining the rest of the blogging team from now on. I hope you like what I have to say.

I’m not one for pulling my punches – at least not in writing. I don’t mean throwing actual punches. That’s for scumbags like the Biffers who’ve no other way to get their point across. Actual debate’s beyond them so they intimidate and threaten people instead. When people who really aren’t clever enough for politics try to become a ‘legitimate political party’ they get hostile and make arses of themselves. And there’s no bigger arse than Golding.

I’ve been reading through all the previous blog entries here and I have to say it’s really made an impression. I knew Britain First was a bunch of wankers before but I didn’t know just how bad they were until this weekend. These people really are nasty – with a capital NASTY. If you haven’t already had a good look around the blog make a point of it. Especially look at the PDF downloads. They really do ‘Expose Britain First’.

I’m not going to get into the PDF writing thing myself. It looks like it’d take up a lot more time than I’ve got to play with. I’m planning on doing a sort of commentary on the Bifferati’s antics as stuff comes up. Like Grasser-Golding’s whiney video about Jayda’s court case. That might be my first proper blog. When I saw that I just laughed. He’s like a whiney-arsed kid who can’t handle not getting his own way. Come to think of it that pretty much sums up Britain First anyway. They’re mostly just childish little shits who can’t handle the fact that the rest of us don’t mind brown people.

Golding’s problem is he’s still a child. Fransen’s problem is she chose the wrong movement to back. She could have joined a different movement or cause and done such a lot better for herself. She’s the sort of hard-faced cow who’d rise to the top in loads of different groups. But instead of making a killing starting a fluffy-kitten appreciation club with lots of pictures of me and my furry little friends (imagine the Facebook likes that would attract) she joined the fascists instead. So now she’s bitter and a bit disappointed that she didn’t choose more wisely. Oh well. Never mind Jayda, lass. You’ve made your bed. Now you’ll just have to lie in it. Be careful though – Golding has a medical condition. You might want to look it up. It’s called nocturnal enuresis.

As for all the other Biffer glitterati, they’re hardly worth mentioning (but I will). There’s Lewis the middle-aged loser who sees the Biffers as his last chance to make something of himself. He’s right… it is… and he won’t.

Then there’s Lomax the military ‘expert’ who thinks pot noodles will be ok for field exercises in Wales. What a joke he is! He’ll be next for the political uniform charge, I should think. The arrogant little turd just won’t be able to help himself but wear his black ‘security’ hoodie with its ‘chief of staff’ badge sewn on like a cub scout’s jumper. I’ll have to watch him. He’s going to be too funny to ignore.

Lee Cooper’s keeping his head down. He might be waiting for further instructions from Jimbo about who to talk to next. He seems to be a bit of a go-between fencing deals between the money men and the street thugs. Guess which camp the Biffers fall into. I’ll give you a hint – they’ve no money.

There’s so many names to get familiar with. So many far right fools to take the piss out of. I hardly know where to start.

Most of the senior women have gone – defected to other fash groups before the Britain First legacy destroys them as well. So have most of the regular supporters of both sexes. Every event they hold gets less and less people attending. Even their supportive Facebook comments are nearly all from overseas. There aren’t many Brits left who haven’t seen through them. Even the genuine fash know that the Biffers are only about making themselves rich. That’s why they’ve all gone off to join other far right nationalist groups instead of giving all their spare cash to fund Golding’s and Fransen’s champagne lifestyle.

So I think I came in a bit too late myself. I’d have loved to be writing about the Biffers when they actually looked like they could’ve been something big. Reading back over the blog’s previous posts that looks like it might have been fun. But as Johnny-come-lately I’ll just have to put up with deriding them as they collapse. That’ll be fun too in its own way.

So look out for the moniker: Fluffy. You’ll be hearing more from me in the future.