Actually it doesn’t. Jihad means ‘struggle’. More often than not Jihad denotes a distinctively spiritual struggle known only to the individual. These personal Jihads typically involve striving to become closer to God, to improve, to think or to act in better ways or to develop a greater self-discipline. 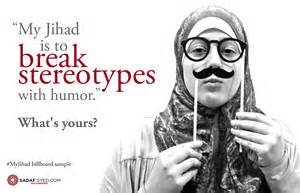 Christian tradition also has its own version of Jihad, of spiritual striving. The lives of the Saints, of countless Christian leaders and indeed of the apostles themselves are replete with examples of exactly the same form of spiritual struggle. Although there doesn’t seem to be a direct translation into English, Christian readers of this blog may be familiar with English words for different aspects of Jihad such as ‘sacrifice’, ‘devotion’, ‘pilgrimage’, ‘quest’ and yes, of course, ‘Crusade’.  Other parallels include Fasting (the Ramadan Jihad) and charity (community service is another important form of Jihad). Britain First’s insistence that every Jihad involves violent conflict is a deliberate misrepresentation of the truth, intended only to create the impression that devout Muslims trying to improve themselves are extremists bent on attacking the rest of us.

When the biffers claim that Jihad means ‘Holy war’ exclusively, they don’t only demonstrate their ignorance of Islam. They also demonstrate their inability to understand religious principles of both Islam and Christianity, their unwillingness to check their ‘facts’ and their refusal to acknowledge the most basic truths about the religion they claim to have studied, even when those truths are pointed out to them.