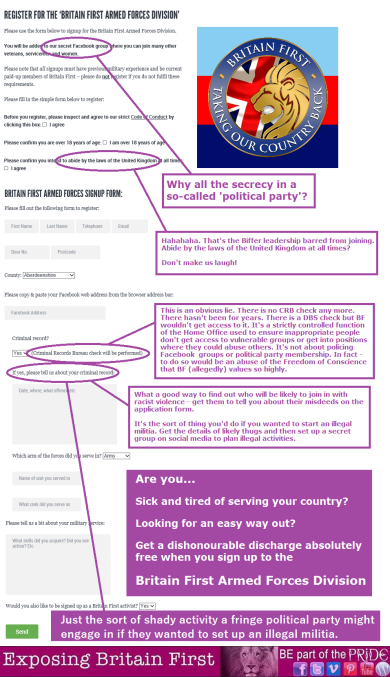 We’re sure we’re not the only ones who’ve long wondered just what the Britain First claims about the long-unavailable ‘CRB’ check is all about. On one level, of course it’s just funny. They’re so out of touch that they can’t even use the right term in their lies. The Criminal Records Bureau (CRB) check has been unavailable for years. It’s been replaced as part of the wider overhaul of Safeguarding legislation in favour of the new Disclosure and Barring Service (DBS) check.

The point of the DBS check is to ensure that organisations working with vulnerable groups (health, social services, childrens’ workers, teachers etc) don’t unwittingly employ people who present a risk to the vulnerable people they work with. It’s a highly confidential service and only relevant organisations have access to the information revealed by the check.

One reason for this is because the DBS check doesn’t just rely upon public domain records of convictions. It also includes police intelligence, spent convictions, suspicions and even potential guilt by association. This is because the risk to vulnerable people outweighs the obvious difficulties associated with barring people who may not have been convicted of any crime from working in particular professions. It’s not always fair but the government thinks it’s better than letting people who are likely to be criminal have unrestricted access to easily exploitable potential victims.

Just think about that for a moment though. DBS checks provide information about people who may be completely innocent. That’s justifiable when the checks are used to protect the most vulnerable. It’s not justifiable to use it to decide whether or not a person can be affiliated to a political party. The fact that someone may or may not have a criminal record has no impact upon their right to hold a political viewpoint or to join a Facebook group. There is no legitimate reason for Britain First (a political party) to vet its members through DBS. No political party has access to the DBS checking system. The list of organisations that can access the list is here. It’s easy to see that Britain First would never be able to fulfil these functions. Therefore – they have no access to DBS.

So why on earth would the Biffers want us to think they use DBS (or CRB, since they’re so out of date)? We think that’s obvious.

Claiming to perform these checks provides an air of official respectability. If people think the Biffers are performing DBS checks they may think that they’re somehow more legitimate than they are with their secret Facebook groups. As if such a group could ever be legitimate. It reminds us of the childrens’ ‘I-Spy’ club that some of Team EBF were members of as kids. In return for our parents paying our subscription we received a certificate of membership, a badge proclaiming that we were fully-fledged international spies and the opportunity to buy lots of I-Spy books at no discount. It was essentially worthless in real terms but it made gullible children, desperate to belong to something they thought was ‘special’ feel good. It’s very possible that membership of the Britain First Armed Forces Division is just as insignificant, appealing to the immature, the easily led, the gullible and to those most desperate to ‘belong’. It may well be no more significant than that. That’s what Knights’ Templar International is about and the BFAFD may be no different.

Let’s assume that Britain First has a more sinister motive than just making money. Let’s assume that they want to recruit potential terrorists as part of some illegal militia. It wouldn’t be the first time that the British far right has set up their own private ‘armies’. Moseley did it with the British Union of Fascists (BUF) before it was disbanded and the man himself imprisoned. The National Front (NF) did it with the subversive violent, mobile thugs of the ‘Inter-city wrecking crew’ and ‘Combat 18’ and who could forget the violent ‘Infidel’ groups formed under the umbrella of the English Defence League’ (EDL)? 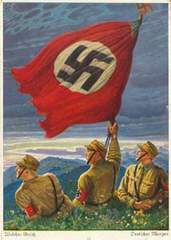 It’d be no surprise if Golding had similair aspirations. We know he’s violent – he’s even posted videos of himself to remove all doubt. We know his black-shirted ‘security’ thugs are very happy to assault those who get in their way – there are plenty of videos demonstrating that on line too. We also know that Golding has delusions of grandeur and a tendency to reach far beyond his grasp.

The attempt to set up an illegal political militia (Like Hitler’s Brown-shirted SA) would be right up his street. The claim to have access to CRB/DBS would encourage prospective militiamen to self-identify as violent thugs from the outset, thus allowing Golding to know who to recruit into their secret hit-squad bullshit group.

If they want to join BF they are, by definition already sympathetic to the group’s fascist aims.

The disclosure part of the application form identifies the most violent and unscrupulous.

The secret Facebook group provides a means of communication.

Either that or it’s no different from Knights’ Templar International (KTI) and the Tufty club!