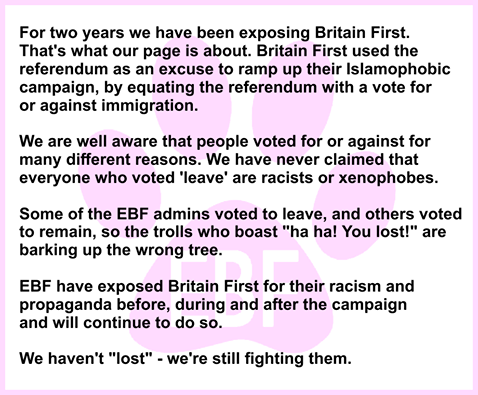 People keep telling us they voted ‘Leave’ but they’re not racist. Yes we know. We actually have a couple of non-racist Brexiters in team EBF. One or two others wavered right up until polling day. We know that lots of people voted to leave the EU for motives that have nothing at all to do with racism. 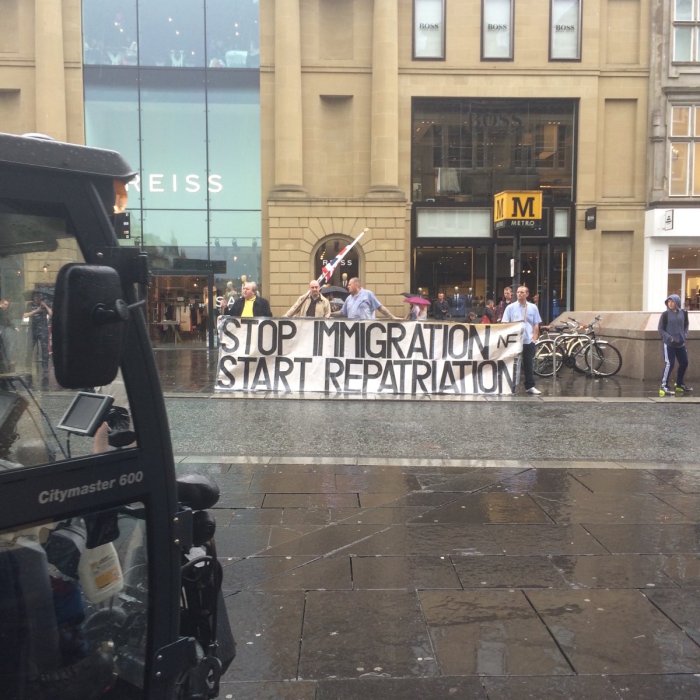 But we also know that many did vote to leave the EU because of racist views. Others did so because of an aggressive nationalism that, whilst not necessarily rooted in ideas of skin colour or racial origin still devalue the rights and contributions of ethnic Brits. That’s not everyone who voted to leave but it is a sizeable proportion.

So why are we still banging on about race when we know it wasn’t the deciding factor for so many Brexit voters?

The answer to that is simple…

Since the decision to leave the EU was announced racist attacks and abusive incidents have increased substantially. Emboldened by the ‘Leave’ result many racists and aggressive nationalists (we know not all nationalists are aggressive, by the way) now mistakenly believe that they have the support of over half the population. They think they have a mandate from the British people to persecute ethnic Brits and some of the incidents over the last few days have been pretty vile.

We have been told of abuse and/or assaults against Poles, Muslims, Jews, Sikhs, Hindus, Italians, Romanians and pretty well anyone who doesn’t fit the white British stereotype. Not that we’re surprised. We suspected that this would happen. Emboldened by a Brexit victory (that actually has little to do with race or religion in practice) the worst of our society has become even more aggressive and hostile.

So to those Brexiters who insist that they’re not racist and that they’re not aggressive the time has come to stand up and be counted. If you disagree with the persecution of minorities. If you don’t support the far right’s call for enforced repatriation of people who may well have been born in this country anyway. If you object to the antics of your fellow citizens who seem to mistake 21st century UK for early 20th century Germany then now is the time to stand up and say so. Repeat after us…

We’ll end this post with the famous words of Edmund Burke. We think they’re very applicable to the current situation here in UK.

“All that is necessary for evil to triumph Is that good men do nothing.”

The decision is made and the consequences, whatever they may be will be best faced as a united nation. The campaign leading up to yesterday’s referendum has been bitter and in some quarters violent. Commentators on both sides of the debate made exaggerated claims and strove hard to alienate their opposing camp. None of this was ever going to be helpful post-referendum.

Given that we might just have slammed the door on the international cartel that buys almost half our exports it seems certain that greater austerity is ahead. Equally worrying, especially for the low paid or those on zero-hour or casual contracts is the fact that many of their EU derived employment rights will cease to have any legal basis in UK law. Those workers who thought that their rights couldn’t be eroded any more than they already have been over the last few years may well be about to get a very large shock as they lose the protection the EU afforded them in the past.

The temptation for the Remain camp to blame the Brexiters for the sudden drop in the pound’s international value and for Brexiters to find a way to claim it’s all Remain’s fault really over the next few weeks, months and possibly years will be almost irresistible for many. The need for those workers who may soon begin to see their rights eroded to blame each other, whether they voted in or out will be equally strong. But we must avoid that temptation.

I won’t deny that I fear for this nation’s future today. But we must not fight each other. One of the most significant long-term consequences of the decision to leave the EU may well be the loss of the European Convention on Human Rights. Many of our current conservative leaders, including the Home Secretary have expressed their desire to reject both the ECHR and the British Human Rights Act that supports it in UK. This move opens the door for those who would remove those rights, potentially to replace them with an as yet unspecified ‘British Bill of Rights’. Potentially we have lost the framework that has hitherto defended the rights of working people, of religious and ethnic minorities and that has guaranteed us fair recourse to law. It’s too soon to know precisely what will happen next but the risk to our rights, especially to the rights of minority groups, to working people and to those who are out of work for whatever reason has suddenly become much more credible.

Not all Brexiters were far right sympathisers but all the far right sympathisers we interacted with were Brexiters. And there’s a reason for that. The loss of the EU means that far right groups like Britain First have just received a massive legal shot in the arm. As this country extricates itself to a greater or lesser extent from European legislation it will become easier for so-minded politicians to erode minority rights. And the thing that will make it easiest of all for them in this post-referendum Britain is sustained division.

If this nation continues to fight against itself, if we cannot find a way to come together and heal the divisions of the last few months of furious campaigning we will be too distracted in hating each other to notice the wholesale erosion of our protections.

The result is what it is. Britain, for better or worse has left the European Union. Now the task is to come together in unity.

Most people I know, be they Remain or Leave voters want to see a strong nation, not a divided one.

A house divided against itself cannot stand.