Jayda Fransen used never to tire of telling us that she has a law degree. Nowadays she’s a bit more retiscent to talk about that. Perhaps that’s because we exposed the truth about her unfinished correspondence course in basic law. Or perhaps it’s because she got bored of academia (and all the hard work it involves) and moved on to easier, more entertaining activities like screaming at brown people and baiting the police.

Either way, given her alleged knowledge of British law you’d think she might be able to put a few Biffers straight about legal processes like police bail, rights and restrictions, the wearing of political uniform and the nature of subversion and sedition. But no – apparently she’s content to let them carry on being just as ill-informed as ever. She hasn’t even bothered to inform Britain First itself about the huge legal trap they’re falling into not just as individuals but as an organisation.

So we thought we’d educate them ourselves. We’ll do Jayda’s job for her because she’s clearly not going to. That’s a shame in itself – it would be nice to see her do something that’s actually useful for a change.

Back in 1936 the Public Order Act was passed banning the wearing of political uniforms and the militarisation of political organisations. The rise of paramilitary politics like the British Union of Fascists had been a step too far and the government acted to preserve the principles of democracy and freedom of expression that we all hold so dear.

That law has since been amended and updated, the most recent version being the Public Order Act 1986 which upholds the uniform and political militarisation bans as well as additional injunctions against stirring up racial hatred.

You’d think Jayda would have thought to warn her cronies about this one, wouldn’t you? Apparently not. She’s such a genius!

Britain First occasionally try to convince us that their fleeces (with the unauthorised use of the Royal crest) are not actually uniform. But their own communications amongst themselves show just how ridiculous that assertion really is. In keeping with their Walter Mitty aspirations to play soldiers they have insignia to denote rank and function, even using coloured clothing to denote function (a bit like Star Trek). This wonderfully obvious exchange contains a comment by Robin Lomax, the Biffers’ ‘armed forces division commanding officer’ talking about black ‘security’ beanies (yes – beanies). It may well be laughable but it’s still criminal! 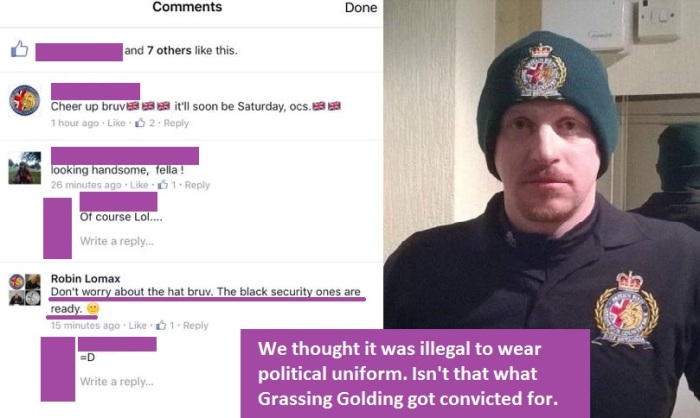 Then there’s a more recent exchange (also involving Lomax) about rank insignia that we’ve reproduced below. 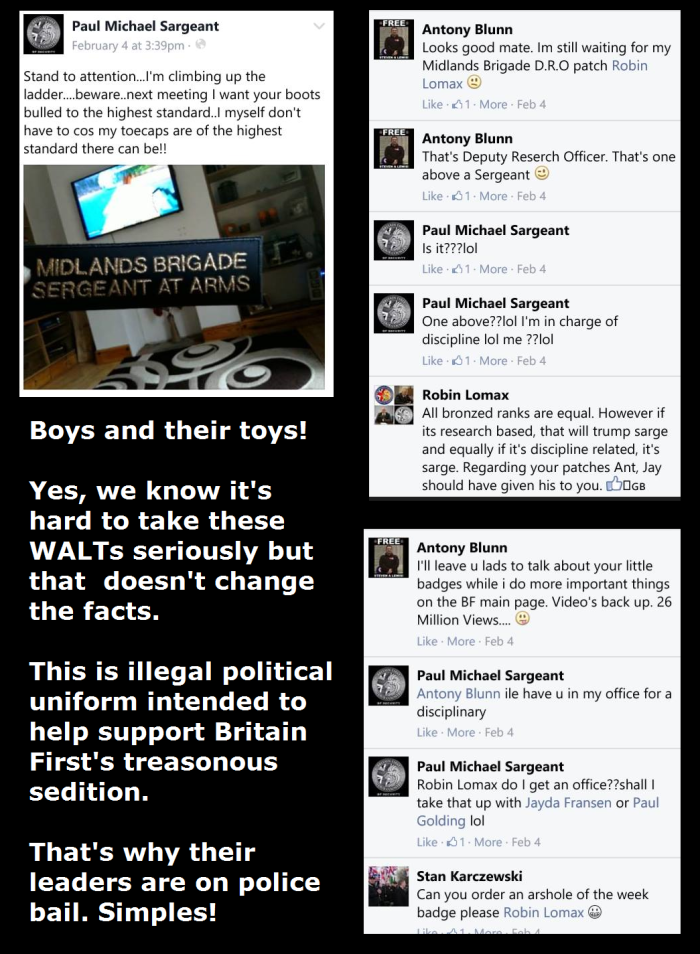 Steve “Pieman” Lewis is currently on bail (as are Der Fuhrer and his deputy) for wearing political uniform in relation to Britain First. Their legal team (or at least their excuse for more fundraising) seems so far to have been unable to make these very serious charges disappear. That’s hardly surprising. This stuff goes to the heart of British democracy and to disrupt our democratic process this way is a form of sedition, arguably even treason. The whole point of Britain First’s nefarious activities is to disrupt our established system of representative democracy, even calling for the execution of current politicians. If that isn’t treason we really don’t know what is!

So come on Jayda – tell your cronies how the law works. That way they might be able to avoid looking quite as stupid as they do when they post ill-informed rubbish like this.

Come on Dutchy… sort it out!