Paul Locke is a Biffer. He’s also the leader in waiting of the English Defence League. We blogged about him before here and here and will continue to watch this nasty little racist as he climbs the boozy ladder to the exalted position of ‘Grand master of the order of Imbibing Brethren’. Officially he’s a humble Division leader from the West Midlands (I’m sorry to say my area has more than its fair share of violent racists) but actually he’s the closest the EDL has ever come to a sage.

Unlike his predecessors he’s actually committed to the League, rather than just in it to line his own pockets. He’s also a slick manipulator who’s very well versed in making a silk purse out of a pig’s ear. He’ll need that ability if he’s going to rescue the reputation of a pack of pissheads like the EDL. But even he seems to be finding it hard to put a positive spin on the recent, disastrous turnout in Dover.

In the aftermath of last Saturday’s South coast Demo, where the entire country’s combined fascist groupings failed to muster more than about 60 malcontents, the best Locke could think of to do was lie. Outnumbered by antifascists,most of the little gaggle of far right cockwombles cowered behind the Police until it was time for them to be escorted home. One of them even legged it through Police lines to the safety of arrest for his own protection. The few ‘hard men’ who decided to attack counter-protestors managed only to show themselves up for the vicious thugs they are before they too had to retreat to the safety of Police protection. It was an abject failure for the fash and everyone knows it. 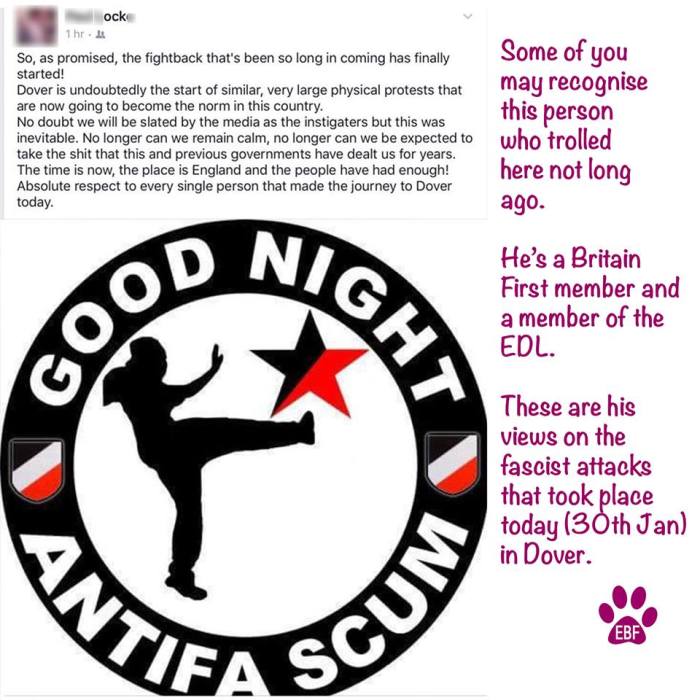 So how did Locke respond to this monumental neo-nazi cock up? He claimed a startling success, pretending that the Dover debacle was the start of some fantasy fash fightback and threatened the outnumbering opposition for good measure. We’d say ‘you couldn’t make it up’ but Locke obviously did.

It can’t have been easy for poor little Paulie (why are so many of these people called ‘Paul’?) to lower his standards to something so unimaginative but when his compatriots let him down so badly he didn’t have much to work with.

We think you’d better get used to that Mr. Locke. These sad sacks will never be worthy of you. That doesn’t change the fact that you deserve them though.