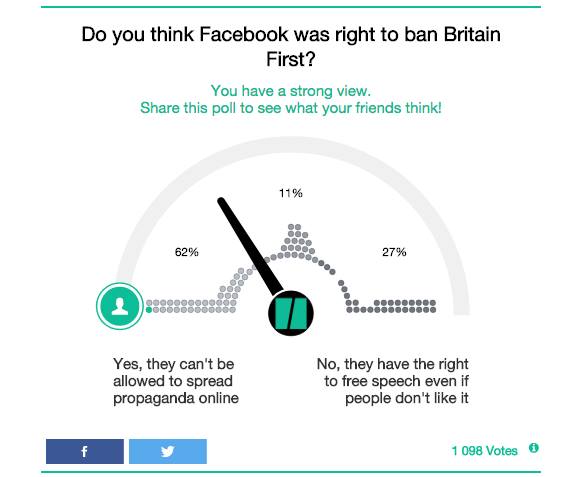 As Screechy and Goldibollocks languish in their Victorian cells (their words not mine) the rudderless fascist ship races towards oblivion. The days of Lewis, Lomax, Carmelo, Besser and Slattery a now distant past and Councillor Bigot and the new gormless ones led by chief mousketeer Andy Edge, (who soon could also be serving time in a rotting jail) trying desperately to keep their magic money tree up. It appears Facebook are dealing a coup de grace to this vile, hate-filled bigoted group as it appears their only money grabbing platform is Facebook.

A new page is already up, Facebook have said they will remove but before they do it appears we can all comment on it. Three years of pent up hate from me will be unleashed when the kids go to bed. 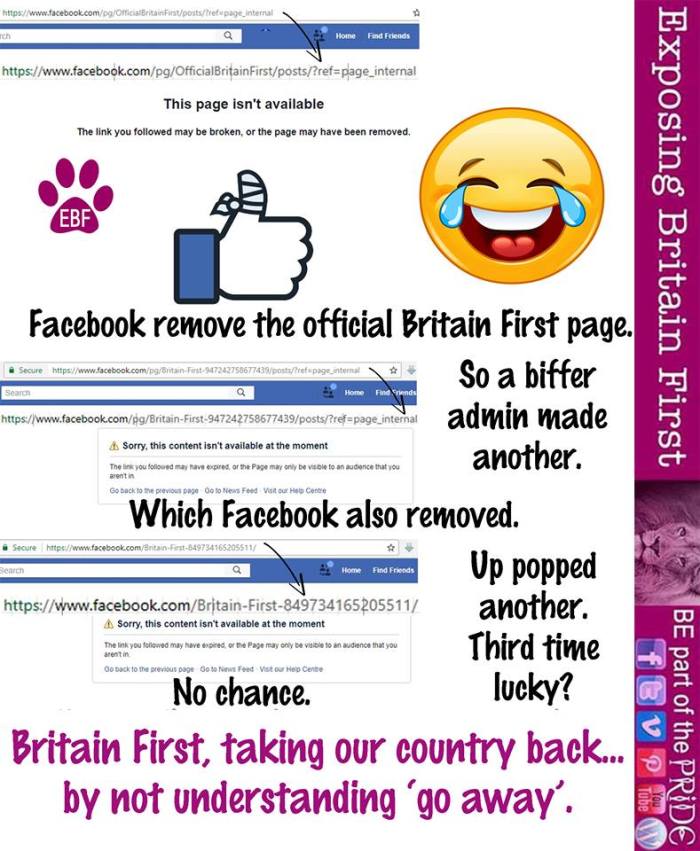 But is it really over? Are we finally seeing the death throes of Britain First? Are we, the admins finally going to get back to concentrating on work, families and having a proper social life? Are we able now to become husbands, wives, mothers and fathers? Well… No. Screechy and Goldibollocks are still about, 36 and 18 weeks ain’t a lot of time. We were hoping years banged up but they aren’t.

So EBF continues until they’ve gone, either fucking off to Fascist enclaves in the Europe they hate or jailed for such a long time they become irrelevant. We’ll still, with your help, chase them, laugh at them and expose them until they decide they’ve conned enough money to fuck off for good.

But for now the ice machine is open the cheap Cava is opened and a celebratory sip is in order. The final push is on!

Britain First’s biffers hate it when we counter their hate speech with facts.

They hate the fact that we take the time to fact-check their misinformation and go to great lengths to debunk their lies. And they try hard to discredit us.

One way they do this is by claiming that we’re ‘politically correct lefties’ who hate freedom of speech. Nothing could be further from the truth. We at EBF have no problem with freedom of speech but like most people we have a problem with malicious lies. Freedom of speech (actually here in UK we use the term ‘freedom of expression’) has limits and there are good reasons for that. It’s long been illegal to slander or libel someone because, as we all know, malicious lies have real consequences for the victim. That doesn’t mean we can’t have and express different opinions. We just shouldn’t go around stirring up trouble with deliberate lies. Let’s put it this way.

Imagine a crowded cinema full of men, women and children who’ve come to see the latest animated kiddies’ blockbuster. It’s a family event and the stalls are packed when some mischevious lout shouts “fire!”.

It’s not true. It’s a malicious deception. There is no fire but people believe the lie all the same.

Is that OK? Is the ‘trickster’ within his rights to exercise his freedom of expression in this way, even though the harm and death he caused to others was entirely predictable?

This sort of ‘speech’ is destructive and capricious. Any argument for ‘free speech’ is entirely disproportionate when measured against the very real damage that it causes to innocent people. Nobody would justify deliberate, harmful lies that put people at risk of harm or death.

Deliberate lies that cause predictable harm to innocent others are not justifiable by an appeal to freedom of speech.

Britain First consistently lies about Muslims, immigrants, non-whites and anyone who isn’t a white-supremacist neoNazi like themselves. They lie deliberately and they do so specifically to stir up hatred. 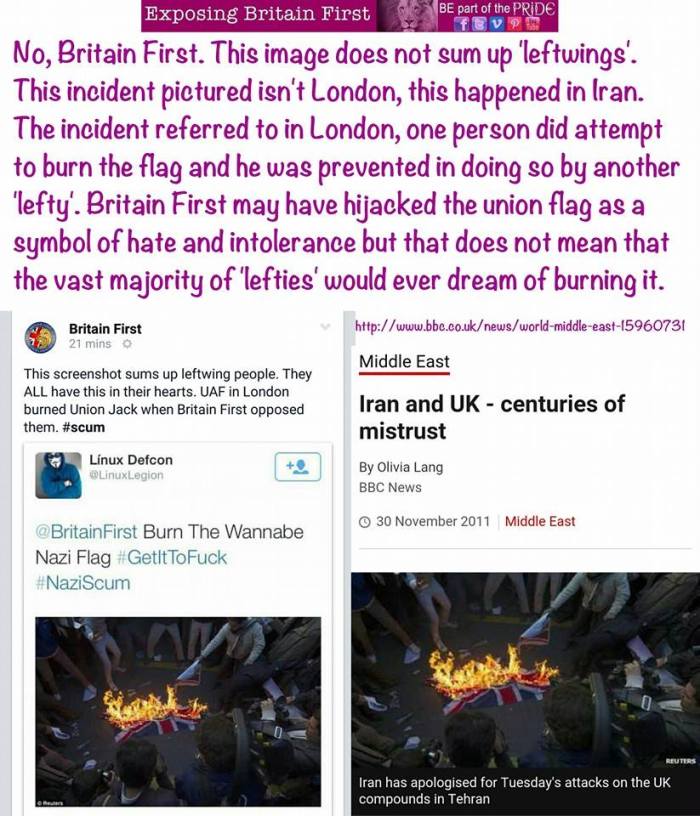 Gullible people believe their lies and this puts the victims of those lies at risk.

People are harmed as a predictable result of the Biffers’ lies.

Remember the point we made earlier…

Deliberate lies that cause predictable harm to innocent others are not justifiable by an appeal to freedom of speech.

Let us spell it out…

Hate speech is not OK.

Lying is not OK

Britain First is not OK

Maybe we should take a leaf out of the French book. They know how to deal with lying hate preachers…

No – we don’t mean the Rock of Gibraltar.

We don’t even mean some lonely little island in the middle of the Mediterranean.

This rock is much, much closer to home.

We’re very grateful to a supporter who sent us in this lovely picture of starving immigrants. It must be awful to be so hungry that you have to queue for hours to wait for charity from a foodbank in a foreign land. How desperate would these people need to be?

They’re not immigrants, they’re British investors. And that’s not a foodbank, it’s a branch of the Northern Rock. Let’s be honest, Building Society investors and stock holders aren’t typically the hungriest people on the planet. This image was taken years ago when the NR first got into trouble as part of the worldwide banking crisis that is the real cause of the world recession.

Not that the xenophobic right wing would ever admit that. They’re far more likely to doctor images to fit their own agenda. And in typical fascist fashion they didn’t even do a particularly good job of their photo-shopped lies. You’d have think they’d have learned their lesson by now. It’s not as though they haven’t been caught out with cheap photo-shopping before, is it?

There again – they are Nazis – we shouldn’t expect too much from them. They never were all that  bright!

Fascist nations tend to promote and tolerate open hostility to higher education, and academia. It is not uncommon for professors and other academics to be censored or even arrested. Free expression in the arts is openly attacked, and governments often refuse to fund the arts.”

The eleventh characteristic of fascism is disdain for intellectuals and the arts. It doesn’t take an academic genius to know that there aren’t too many intellectuals within the ranks of the Biffers. Most of them can barely spell and they’re definitely not good at understanding reasonable arguments. We often get Biffers trying to troll EBF on social media. Their attempts at discussion are limited to cheap insults, accusations of lies or ‘leftiness’ and demands that their opponents believe their arguments because ‘someone important said so’.

Head Biffer, Fuhrer Folding Golding repeatedly refuses to accept invitations from academics (and others), bad-mouthing them across social media instead. As a modern fascist organisation, Britain First continues the time-honoured fascist tradition of ignoring or attacking academics rather than risk being humiliated in debate with them.

Their attitude to the arts is no different. Although quite happy to rip off graphic art, thus stealing royalties from their creators they aren’t at all happy to acknowledge any point that artists want to make. Their treatment of the ‘Beyond UKIP’ cabaret ensemble was pure thuggery. A bunch of Biffers turned up at the Beyond Cabaret meeting in North London, to ‘confront’ these people who had the audacity to dance (that’s right – dance) around Nigel Farage one Sunday afternoon. Their artistic message was lost on Britain First who value nothing more creative than the Sunday Sport and boxing on the telly.

Under Britain First Fascists it’s clear that any artistic endeavour would need to conform to the narrow, totalitarian message of the Biffers. Now where’s the fun in that?

This is the sixth of Britt’s characteristics of Fascism and it fits Britain First to a ‘T’. Although they have absolutely no influence over the British media their behaviour both on and offline in relation to both the press and social media gives us a perfect indication of what they’d do if they could.

Censorship is one of the most important weapons in the Biffer arsenal. That’s why they remove so many comments from their Facebook page. That’s why they have harassed and threatened anyone who speaks out against their hate-filled agenda. That’s why they have threatened several newspapers and individual reporters who published uncomplimentary articles about them. They even threatened Channel 4 following the now infamous documentary showing them making fools of themselves in central London.

Not only do the Biffers indulge in extreme censorship – they also publish distortions and lies on a daily basis. In the fantasy world of the Biffers all Muslims are criminals and rapists so they doctor images (with very amateur photoshopping) and even make up quotes from famous people pretending to show how awful their intended victims are. The tactics they use are exactly the same in principle as those of Joseph Goebbels, Adolf Hitler’s propagandist and the newspaper of Nazi journalist Julius Streicher.

We only need to look at the Nazi propaganda machine to see what Britain First would do if it ever gained control over mainstream media instead of just its own Facebook pages.