The Cockwombles at Britain First would like you to believe that they are rising to a current threat that is particular to our age and unlike anything that this country has faced before. They seek legitimacy in the public mindset by claiming to be a topical organisation dealing with a modern problem. But nothing could be further from the truth.

In reality Britain has had a problem with its racist element for decades. British Nazi opposition to the Jews is well known. So is their opposition to black immigrants after the arrival of the Windrush in the mid twentieth century. Racial and religious discrimination isn’t new and it’s just as indefensible and stupid today as it ever was.

“Mr Jolly, 66, said the ban on turbans and beards was a direct attack on his religion.” 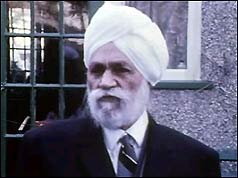 That’s a quote from a BBC news article dated April 9th 1969. Exactly 47 years ago today British Sikhs won the right to wear beards and turbans at work. The dispute only ended when Sohan Singh Jolly, a 66 year old Sikh man threatened to burn himself to death in protest at the ban.

Banning beards and turbans in 1969 isn’t unlike the modern Biffer call to ban Islamic traditional dress. And in both cases the motivation is far from respectable. The truth is that religious dress like the Sikh turban or the Muslim hijab really isn’t anyone’s business but those who choose to wear them. It’s only offensive to those who are so wrapped up in their own hate that they will seize upon almost any excuse to feign outrage but the real agenda is racism and religious hatred.

There’s nothing new in the modern far right getting their knickers in a twist about hijabs and burkas. They’re just repeating a very old and tired tactic intended to camouflage their real motivation – racism and religious hatred. But we have news for them…

Just as The House of Lords ruled in 1982 that Sikhs  were entitledto protection under the Race Relations Act, so too are Muslims. You can bang on about Islam not being a race all you like but it’s still protected by British law and you’re still guilty of criminal discrimination.

Given your love of British laws and traditions, we’d have expected you to know that.