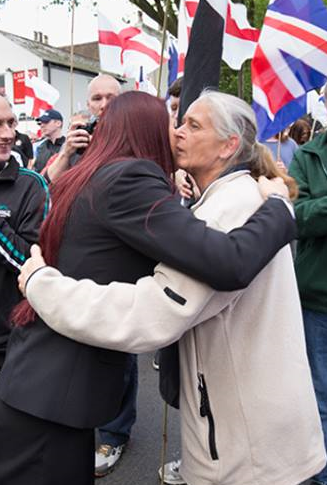 We thought long and hard about this post. After all, we don’t do ‘doxing’ – that’s a favourite Britain First pastime. They think nothing of publishing people’s details online in the hope that some sad fascist will go and break a few heads for them. That’s not our style.

But we thought that a registered political candidate for a registered political party standing in an important election might be different. We looked around for official election materials to use but couldn’t find anything for Christine. So we resorted to her Facebook page instead. Her address and contact details (other than Facebook which is closed down tightly enough) aren’t published here though. We thought we should keep that information to ourselves.

So why are we picking on this particular Britain First candidate? You might well ask. She looks like a sweet old lady, and for all we know she might be just that. Mind you – sweet old ladies tend not to be evicted from their homes because of antisocial behaviour but that’s a different story.

We’re bringing Christine to your attention because she’s fantastic evidence of political ineptitude and nepotism within the ranks of Britain First, the UK’s most laughable neo-nazi party.

Christine has no political experience so far as we can tell. She’s never held political office of any kind as far as we know (not even a parish council) and has never so much as made a speech. She’s obviously made an impression on Britain First’s leader, Paul Golding though. Maybe that’s because she’s his Mummy!

Yes, that’s right! Britain First is so poorly supported that they have to resort to making Golding’s ageing mother a candidate for May’s London Assembly elections.

We bet Dowson’s financiers will love that! Five grand deposit for Golding’s old lady to make fools out of them and all the other misguided Biffers who were stupid enough to cough up cash for the cause.

As Britain First is so fond of saying…

You couldn’t make it up!