The English Defence League, under the auspices of its new, post-Tommy leadership has decided to target Preston, that well-known hotbed of Islamic extremism for its next demonstration. Readers of this blog may well have heard of this fine, multicultural Northern town before.

Preston is the home town of those public-spirited, outstanding Muslim citizens who volunteered to put themselves out so much during December’s floods. They even drove 100 miles North to help out with evacuations, distribute food and donate money and bedding. These are the guys who raised over four thousand pounds down the local Mosque for flood victims in less than a week. These are the guys who demonstrated that renowned British spirit of helpfulness and selfless service to others. The fact that it’s also a foundational element of Islam may not be all that familiar to the drunken defenders of England but they should at least be able to recognise the generosity that they claim as their own.

On the other hand, we at EBF don’t remember reading anything at all about the selfless generosity of EDL members during those difficult times. We’d be happy to stand corrected if anyone can furnish us with newspaper articles about the EDL helping flood victims in their hour of need. Just post the links in the comments below. Go on – feel free.

And how will this noble and knightly order  of the imbibing brethren honour the service of Preston’s Muslim community?
Will they contribute to the Mosque’s next charity appeal fund?
Will they write a letter to the newspapers in praise of Islamic selflessness?
Will they post a message of appreciation on their Facebook page?

What they will do is go and make a nuisance of themselves next month, terrorising Preston’s Muslims and stirring up as much trouble as they can before nipping off for a beer and a punch up.

And they think of themselves as the embodiment of all that’s British.

We think they could learn an awful lot about Britishness and even about common decency and humanity from Preston’s Muslims. We don’t expect that they will though! Bleedin’ nazis! 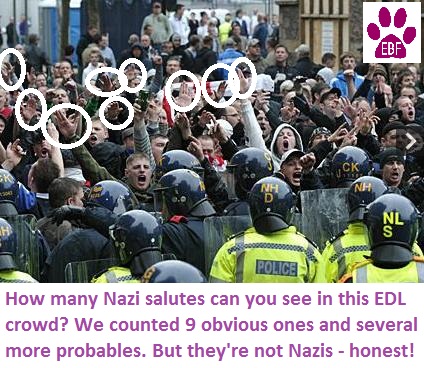