So the Christmas tree is chopped up and ready for the fire, the decorations are in the loft and the kids are back at school. The festivities are over for another year and the Christmas lies from the biffers are also consigned to the loft only to be regurgitated around October.

So let’s have a rummage through all things Biffer over the last 7 days. Let’s have a little look…..

Aha obviously a nasty credit card bill just arrived as there is a begging email. Unfortunately the mystic landlady got it wrong so I lost my 50p in the office sweepstake. I can’t believe after all this time of not picking £5thaaaasand. I did this time and the little buggers go and pick £1975. Now I’m not sure whether you’ve ever had to engage a solicitor before but they’re bloody expensive and I’m not sure that 2 grand would do a lot. Just a thought Goldibollocks. If you don’t harass ladies in their homes, don’t wear political uniforms and certainly don’t act like a Cockwomble, you won’t get nicked and you won’t have to pay.

An item on their page inferred that a Muslim gang beat up a white man in Baildon this week. 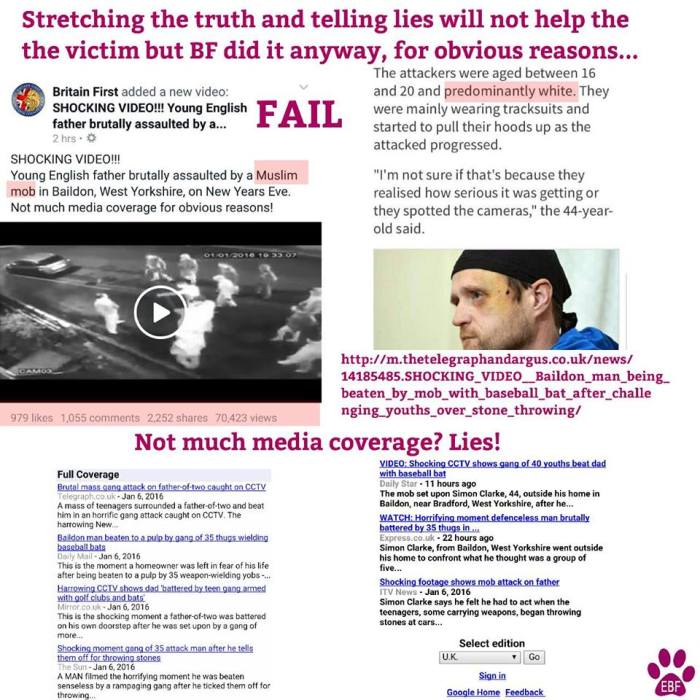 The trouble is after reading the paper it appears the assailants were “predominantly white.” There was a predictable outrage over at Biffer central and some of the comments were absolutely vile and disgusting. I understand that the post was passed to West Yorkshire police, and amazingly the post disappeared. 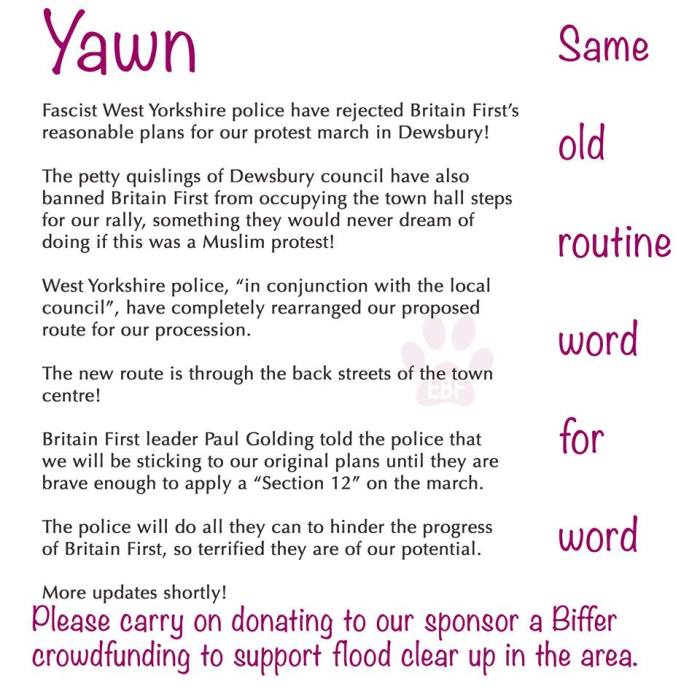 Now I’m not into conspiracy theories, (except that Fosters continuously put mind drugs in their barrels), but trying to incite the local population might rather have lead the coppers to re route their shuffle round Dewsbury to a car park and an industrial estate. Another tip for you Goldibollocks, don’t antagonise the cops and they may just not antagonise you. In saying that continue on your shuffle because we here in the EBF group are sponsoring you. If you haven’t seen the page please sponsor us to sponsor them. Funds will go towards helping the victims of the floods (at the time of writing £259 has been pledged).

Apart from the usual “Muslims are this” and “Muslims are that”, the last thing that caught my eye this week, apart from the landlady’s new hairdo, was the fact they have ditched the conferences (probably because they’ve ran out of places that’ll have them and BT won’t let them have a phonebox) and decided to have a bifferfest instead. Now I’m not sure about you but I haven’t stopped sniggering since, causing the landlady to think I’m having an affair with the barmaid (I’m a grumpy old sod most of the time you see).

This festival in a field near somewhere is free (tenner for a wee??) where you can learn about British fascism, sorry ‘culture’, have discussions on bifferland, sports, and have food and drink there. It’s also camping so Millets might want to stock Union Flag tents (although given their tendencies to fly them upside down on their shuffles, 10 upside down tents in a field would make me titter. Also do they make bullet proof tents for the commanders in chief? I’m also assuming that it will only be non halal food there, would be such a shame if some did infiltrate its way into their diets. Anyway good luck getting your TENs license not easy when a load of publicans and licensees have words with contacts.

Finally, another page that brought great mirth to me and the others was the absolute foamfest over on the Kingsmill Facebook page over Kingsmill’s decision to become halal certified. Now as some of you are great troll hunters (a new badge has just been made) pop over there, leave a message and sit back.

Now I must go, something about a buying a handbag for the landlady as penance for being cheerful.