I haven’t posted for a while. That’s because we took the girls up North to York for a little break. Our littlest has now decided she wants to be a Viking ‘shield maiden’ when she grows up. Why, oh why did we have to take them to the Jorvic centre?

So I haven’t had the time to write much but I have been reading – keeping up with developments over at Biffer Towers. I’ve watched with great interest the intimidating but actually toothless legal letters that Dowson has been sending out to anyone who dares to disagree with him. I also took a particularly keen interest in the way that the Biffers continue to misrepresent the news to suit their own, bloodthirsty agenda.

Whilst we were in York we climbed the steep stone steps up to Clifford’s Tower, the site of one of medieval England’s most notorious Jew massacres. It happened in the late 1100s, partly as a result of the ‘Blood libel’ in which Jews were accused of a range of crimes from poisoning wells to the ritual murder of Christian children. Of course, the hapless Jews were quite innocent but that didn’t stop the uneducated, medieval Christian mob from butchering them.

Hubby and I were talking about that awful York massacre when this EBF meme appeared on my phone. It really is remarkable how similar the medieval blood libel is to the modern Islamophobic libel perpetrated by far right, neo-Nazi groups like Britain First. Their not so subtle rewording of the original Huff Post article may be predictable but it’s also dangerous and incredibly dishonest. Nothing new there then! 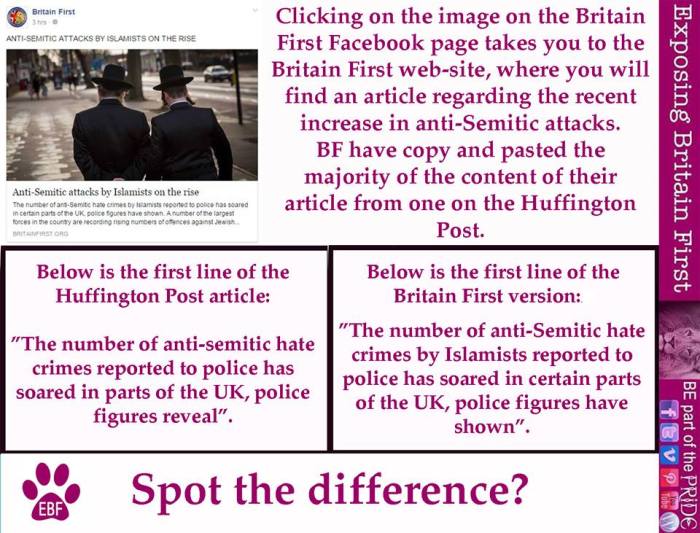 The bigots at Biffer Towers love to accuse British Muslims of any crimes they can think of – even when they have no evidence for Muslim involvement at all. We’re sorry to have to break it to Folding Golding and his sidekick Dutchy Fransen but ‘wanting it to be true’ doesn’t constitute evidence of actual guilt in any proper (kangaroo free) court. We know that the burden of proof requirement inside Biffer Towers is a bit different but in the real world telling lies to the judge doesn’t really work. But of course, they already know that. The not so dynamic Biffer duo learned that lesson when they picked up their recent High Court injunction.

We think it’s very interesting that whilst they’ll happily blame British Muslims for all sorts of henious crimes, including paedophilia and murder…

They don’t seem too keen to comment when the culprit turns out to be one of their own white, neo-Nazi, paedophiles. We’d have thought they’d at least issue some sort of retraction or apology for claiming this poor little girl was murdered by Muslims. That’d be the decent thing to do, wouldn’t it?